[restored from my Wordpress blog]

NServiceBus is a very popular messaging and workflow framework for .NET developers across the globe. This week a few peers of mine and I were working for one of our global ISV partners to evaluate, if NServiceBus can be used for Hybrid Cloud and portable solutions, that can be moved seamless from On-Premises to the Public Cloud and vice versa.

My task was to evaluate, if NServiceBus can be used with both, Microsoft Azure Service Bus in the public cloud as well as Service Bus 1.1 for Windows Server in the private cloud. It was a very interesting collaboration and finally I got to write some prototype code for one of our partners, again. How cool is that - doing interesting stuff and at the same time it helps a partner. That’s how it should be!

The journey and prototyping began with setting up an On-Premises Service Bus 1.1 environment in my home lab. Fortunately there are some good instructions out there, but of course nothing goes without any pitfalls. Here’s a good set of instructions to start with - note that I did setup an entire Azure Pack express setup, which is clearly optional. But it makes things more convenient, especially for presentations, since it provides the nice, good old Azure Management Portal experience for your Service Bus on-premises. Here’s where you should look at how-to setup things:

At the end of this journey, which took me about half a day overall starting from scratch and figuring out the little gotchas mentioned above, I had a lab environment to test against. I am a fan of using Royal TS, hence the screen shot with my on-premises Service Bus as web pages embedded in Royal TS: 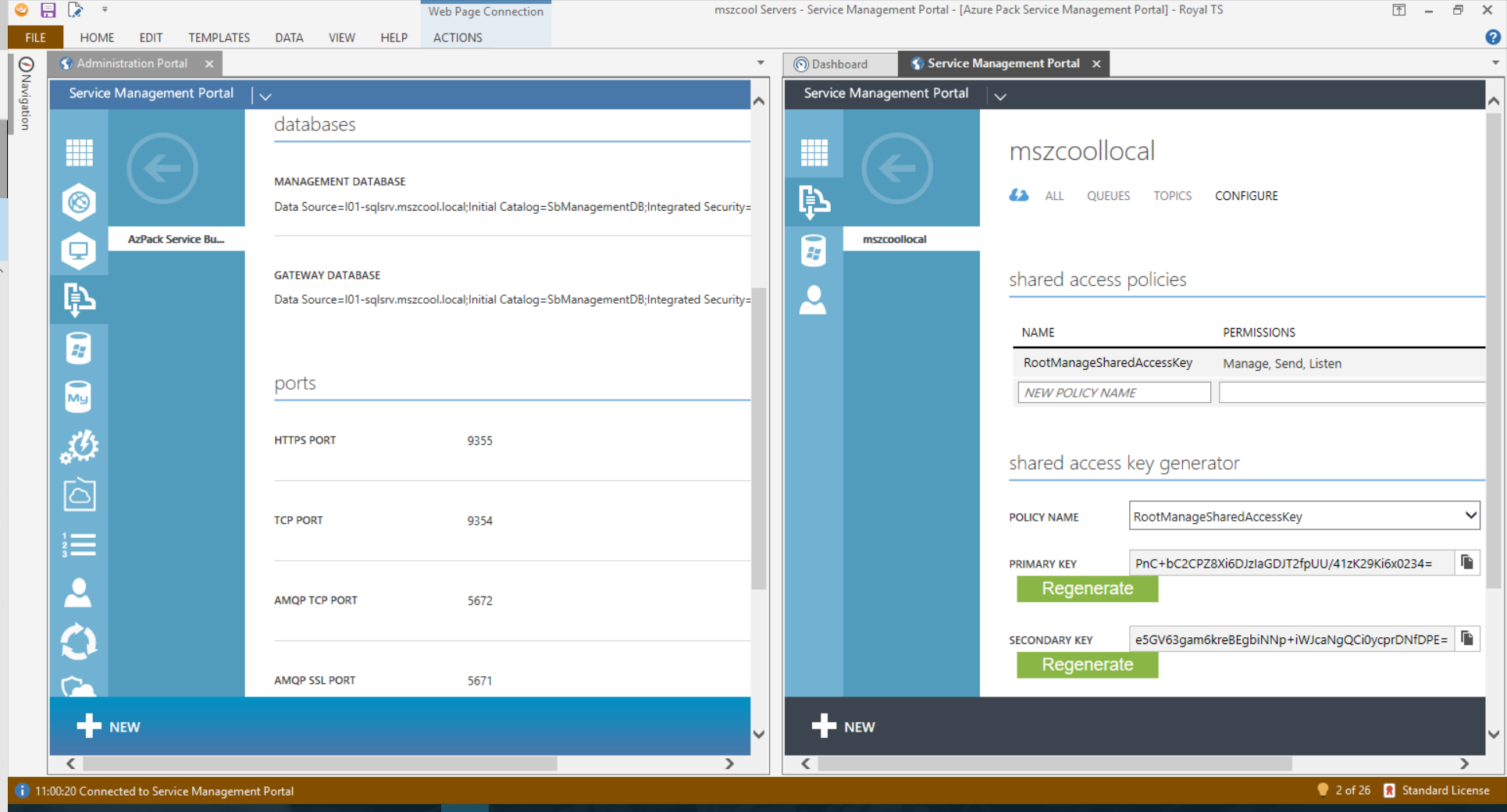 The second part of the challenge was easy - figure out if NServiceBus supports Azure Service Bus, already. Because that would give us a good starting point, wouldn’t it!? Here are the docs for the NServiceBus transport extension for the Azure Serivce Bus: source code.

But the point is, the earliest version that supports Azure seems to be NServiceBus v5.0.0 and they started with a Microsoft.ServiceBus.dll above 3.x in the code-base. This version of the library is not compatible with Service Bus 1.1 for Windows Server. So I had to dig into the source code and back-port the library. Fortunately, Particular is open sourcing most of the framework’s bits and pieces on GitHub - so it does for the NServiceBus.AzureServiceBus connector here. Note that I am referring to the version 6.2 of the implementation, directly, since that works with NServiceBus 5.0.0 which our global ISV partner is using at this point in time. I also tried back-porting the current development branch, but that turned out to be way more complex and risky. And it was not needed for the partner, either:)

So the needed step is to back-port to a Service Bus SDK library that also works with Service Bus 1.1. Service Bus for Windows Server recently received a patch to work with .NET 4.6.1, but it has not received any major updates since its original release. So it is behind with regards to its APIs compared to Service Bus in Azure.

I’ve done all of the steps below on my GitHub repository in a fork of the original implementation. Note that you should only look at my work in the branch ‘support-6.2’ which is the one that works with NServiceBus 5.0.0. The rest is considered to be experiments as we speak right now:)

Here is the link to my GitHub repo and the fork!! 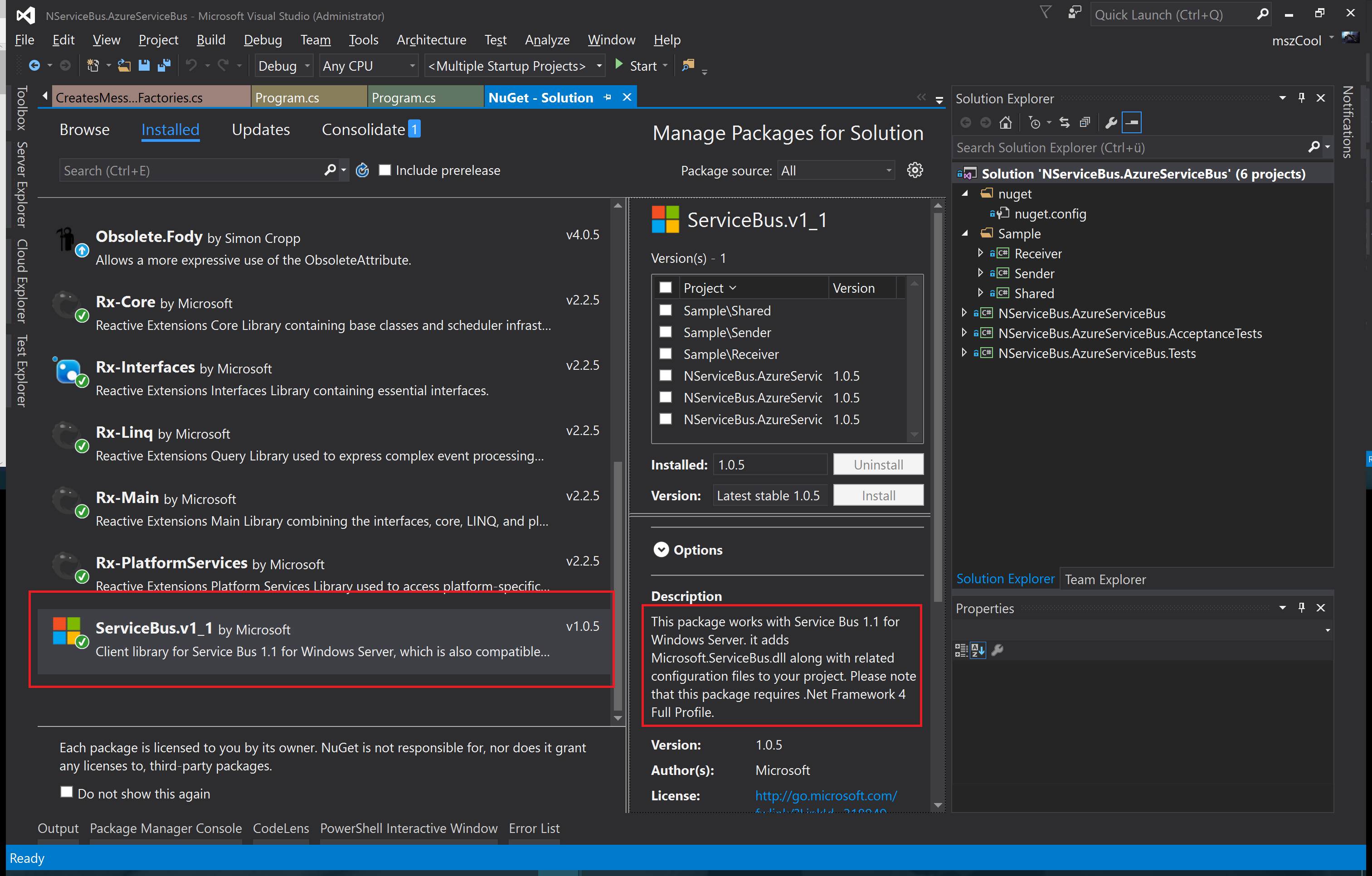 The rest was all about looking where the NServiceBus-implementation is using features that are not available in version 2.1 of the Service Bus SDK and testing it against my Service Bus 1.1 for Windows Server lab setup. I think the best place to look at what actually changed is by looking at the change-logs on my GitHub-Repository:

Here is the little code-snippet that checks if the code is used for on-premises Service Bus services or for Azure Service Bus instances:

The part where I needed this detection most was to decide, how-to instantiate the MessagingFactory. This is the relevant piece of code - note that MessagingFactory.Create() with the NamespaceManager-Address passed in does only work in the public cloud, not with Service Bus 1.1 on Windows Server:

Finally with those fixes incorporated, I was able to get almost all things working and all except two tests passing for now. For the proof-of-concept that is successful for now, since it proofs that the partner could achieve what they need to achieve.

Now comes the cool part - testing it out and seeing it in Action. The Samples I’ve added to the git-repository are simple messaging examples which I’ve modified from the NServiceBus Samples repository as well. Note that I’ve taken the Non-Durable MSMQ sample to proof since starting-point for the partner was MSMQ and I wanted something super-simple to start with. That is just how far I got, eventually I try other samples (but no promise at this time:)). Below the code-snippet of the sender - the receiver looks nearly identical and you can look it up on my repository on GitHub:

Here’s the code actually in action and working. You see what it produced on my on-premises Service Bus as well as the log output from the console windows. Note that the message handler part of the receiver outputs that it received a message.

One thing I played around with was having two receivers, that’s why you see two output-lines for one single message in my receiver. To clarify, here’s the code of MyHandler.cs from the Receiver project which outputs those lines:

I think this Proof-Of-Concept we’ve built alongside with other aspects we covered for that Global Software Vendor partner in UK demonstrates several aspects:

Note that my attempts are meant to be a Proof-of-Concept, only. You can look at them, try them and even apply them for your solutions fully at your own risk:)

I think it was a great experience working with the team in UK on this part of a larger Proof-of-Concept (which also included e.g. Azure Service Fabric for software that needs to be portable between on-premises and the public cloud but wants to make use of a true Platform-as-a-Service foundation).

I hope you enjoyed reading this and found it interesting and useful.