This week I was presenting at the CloudFoundry Summit 2016 Europe in Frankfurt, of course about running CloudFoundry on Azure and Azure Stack. It was greate being here, especially because one of my two main Global ISV partners I am working with on the engineering side, have been here as well and are even a Gold-sponser of the event. It was indeed an honor and great pleasure for me to be part of this summit here … and great to finally have a technical session at a non-Microsoft conference, again:)

Indeed, one reason for that blog-post is because I ran out of time during my session and was able to show only small parts of the last demo.

Anyways, let’s get to the more techncial part of this blog-post. My session was all about running CF in Public, Private as well as Hybrid Clouds with Azure being involved in some way. This is highly relevant since most enterprises are driving a multi-cloud strategy of some way:

Despite the fact my session was focused on running Cloud Foundy on Azure, a lot of the concepts and architectural insights presented, can be re-used for other kinds of deployments with other cloud vendors or private clouds, as well.

The basics - Running Cloud Foundry on Azure and Pivotal

Microsoft has developed a Bosh CPI that enables bosh-based deployments of Cloud Foundry on Azure. The CPI is entirely developed as an Open Source Project and contributed to the Cloud Foundry Incubator project on GitHub.

Based on this CPI, there are two main ways for deploying deploying Cloud Foundry clusters on Microsoft Azure:

There’s a very detailed guidance on all of those GitHub repositories available that do explain all the details, I would suggest to follow this one since it is by far the easiest one: Deploy Cloud Foundry on Azure and always follow the via ARM templates suggestions of the docs.

Finally, in addition to Azure, to completly follow this post you need a 2nd CF cluster running in another cloud. The by far easiest way is to setup a trial account on Pivotal Cloud, which provides you with some sort of “CloudFoundry-as-a-Service”. Follow these steps here for doing so…

A Multi-Cloud CF Architecture with Azure on one side

There are many reasons for multi-cloud environments. Some might include running parts in private clouds because of legal and compliance reasons while others including spreading risk across multiple cloud providers for disaster recovery reasons. The example in this post is focused exactly around the multi-cloud DR case since it covers two public cloud providers: 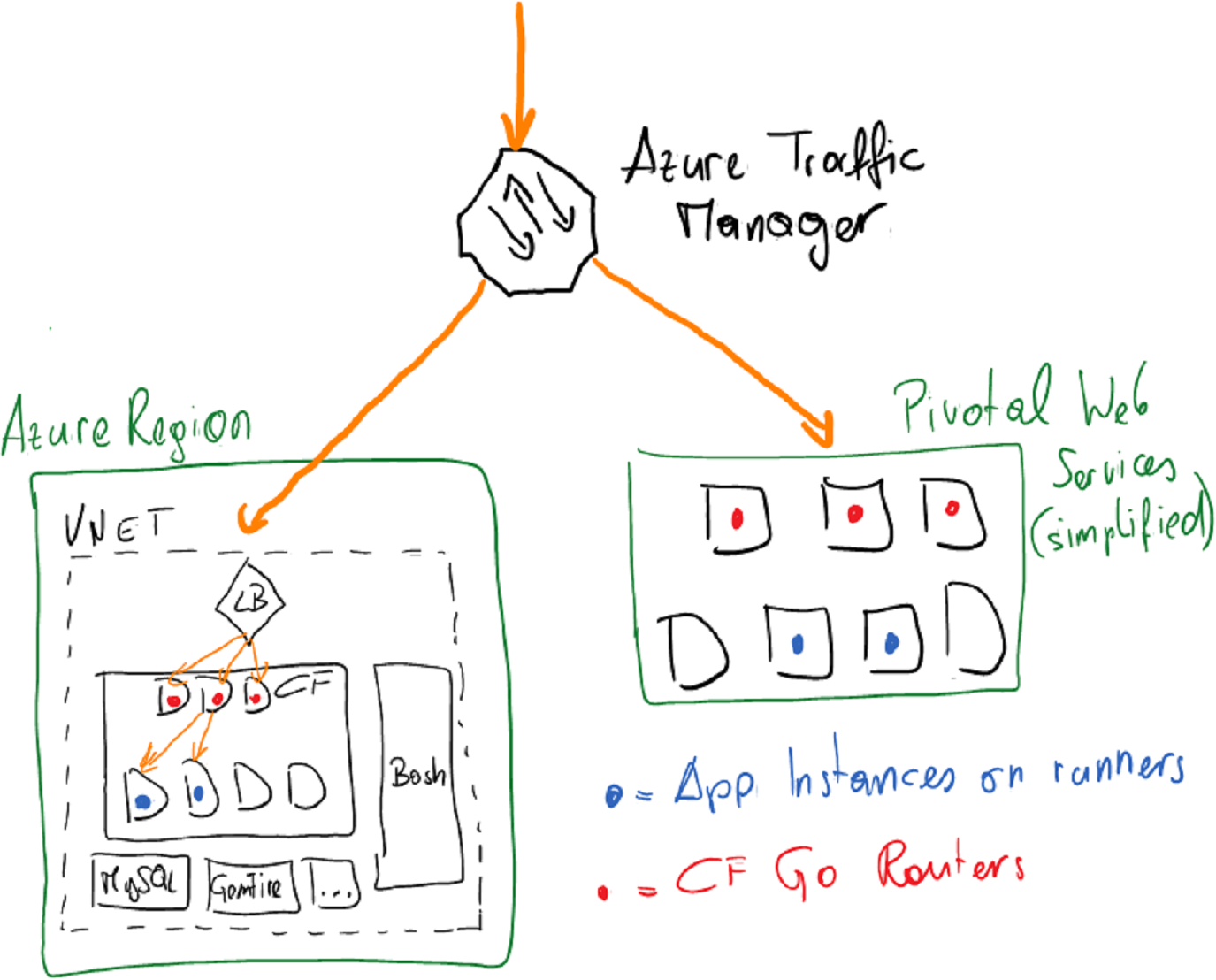 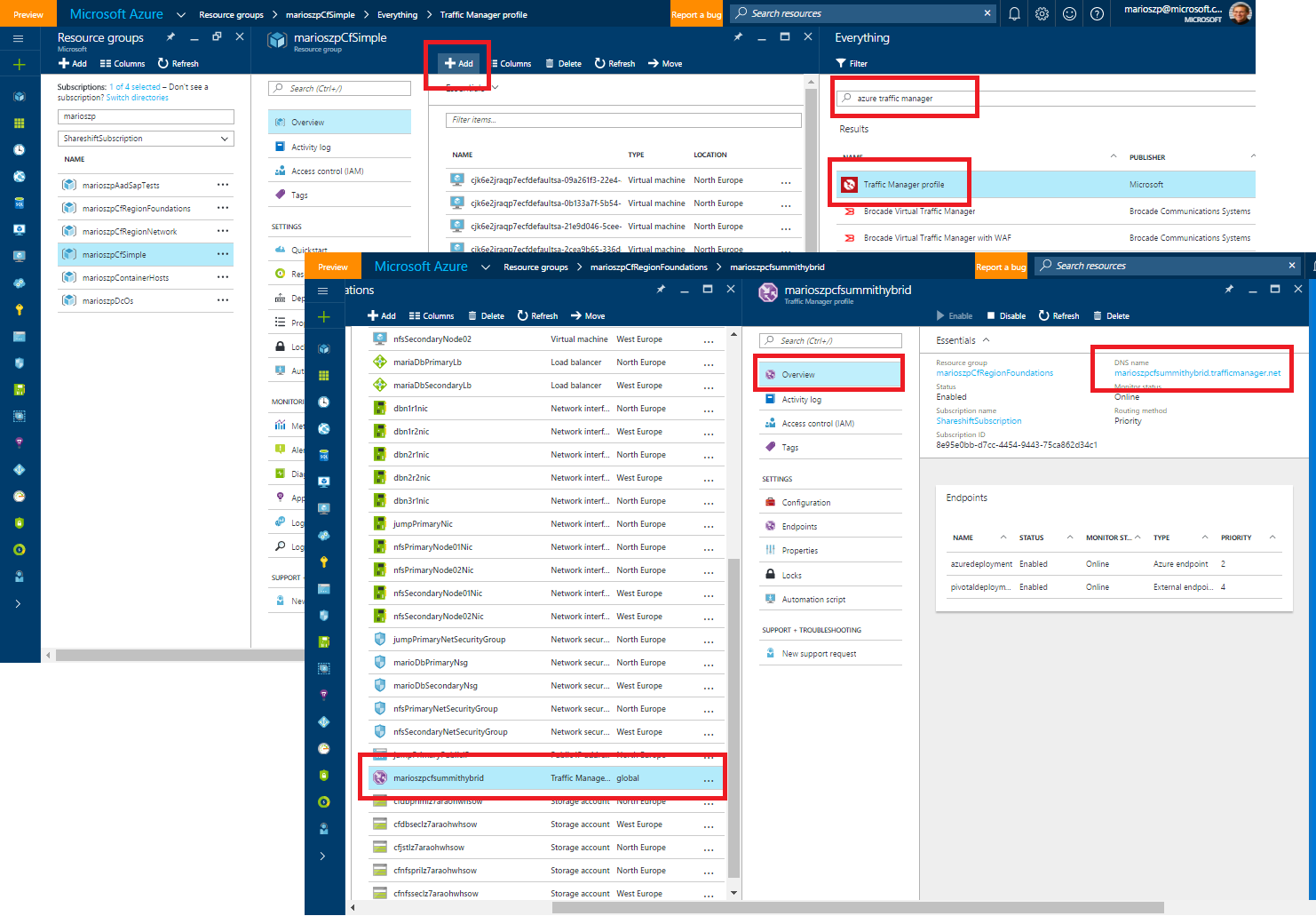 As a next step, we need to deploy the sample application to Pivotal web services and need to take note of the (probably random) domain name it has associated ot the application.

Deploying the App into Cloud Foundry on Azure

The deployment of the sample app into Azure goes exactly the same way, except that we’ll need to use different API end-points, organization names and spaces inside of Cloud Foundry:

The Cloud Foundry API end-point I used above is the one that is registered by default when using the ARM-based deployment of open source Cloud Foundry with the Azure Quickstart Templates. The DNS-registration mechanism used there is documented here.

Also note the environment variables I am setting in the scripts above using cf set-env multicloudapp REGION "xyz". Indeed, that is used by our sample application (which is written with Ruby in this case) to output, in which region we are running the app. That way, we can see, if we are directed to the app deployed in Azure or in Pivotal Web Services.

Finally, if you’re new to Azure, the best way to find out the public IP which has been created for your CF cluster, is looking up a public IP address in the Azure Portal which has been created inside of the Resource Group for your Cloud Foundry cluster. Another way - if you are a Shell Scripter - would be to use the following command with the Azure Cross Platform CLI:

In our case, we use a simple Priority-based policy which means, Traffic Manager tries to always direct requests to an endpoint with the more important priority except that endpoint is not responsive. For a full documentation about policy routes, please refer to the Azure Traffic Manager docs.

As you can see from the above, we have two endpoints:

Let’s give it a try…

Now, in the previous configuration for Traffic Manager, we defined that the Pivotal Deployment has priority #1 and therefore will be preferred by Traffic Manager for Traffic routing. So, let’s open up a browser and navigate to the Traffic Manager DNS name for your deployment (in my screen shots and at my CF session that is marioszpcfsummithybrid.trafficmanager.net):

Of course, a Cloud Foundry veteran spots immediately, what that means. I am not a veteran in that area, so I was falling into the trap…

What I forgot when setting this up, originally, was configuring routes for the Traffic Manager Domain in my Cloud Foundry clusters. Otherwise, Cloud Foundry will reject requests coming in through that domain as it does not know about it.

We need to configure the routes on both ends to make it working, as shown below, we’re adding the traffic manager domain to the routes and ensure, CF routes traffic from those domains to our multi-cloud sample app:

Now let’s give it a try, again, and see what happens. This time we should see our Ruby sample app running and showing that it runs in Pivotal since we defined the priority for the Pivotal-based deployment within Azure Traffic Manager.

After I indeed did the route mapping on Azure, Traffic Manager still claimed that the Azure-side of the house is Degraded, despite having the route configured. Initially, I didn’t understand why.

I didn’t have this problem when I initially tried this setup before. But when I initially tried this, I did not have assigned a DNS name to the Cloud Foundry Public IP in Azure. I’ve changed that because I tried something else in between and assigned a DNS name to the Azure Public IP for the CF Cluster. This lead traffic manager to route against that DNS name instead of the IP.

For troubleshooting that, I initated a fail-over and stopped the app on the Pivotal side (see next section) to make sure, Traffic Manager would try to route to Azure. A tracert finally told me, what was going on:

When looking at the selected routes, we immediately spot, that the traffic manager domain gets resolved to the .cloudapp.net domain of the Azure Public IP. So my route on the CF-side of the house was just wrong. The route for Azure should not go against the traffic manager, but rather on the custom domain assigned to the cloud foundry cluster’s public IP in Azure:

This indeed fixed the situation and finally my Azure deployment was recognized as Online on the traffic manager side of the house, as well.

Important Note: this fix is needed, only, if you have a public DNS name assigned to your public IP address for the Cloud Foundry cluster in Microsoft Azure. If you just map the public IP address, itself (only do this for static IPs, if at all), then this step is not needed.

Of course, we want to test if our failover strategy really works. For this purpose, we kill the App on the Pivotal-environment by executing the following commands:

After that, we need to wait a while until traffic manager detects, that the application is not healthy. It then also might take a few seconds or minutes until the DNS record updates are propagated until we see the failover working (the smallest DNS TTL you can set, is 300s as of today).

So watch, what goes on, the simplest way is looking at the Azure Portal and opening up the Azure Traffic Manager configuration. At some point in time we should see, that one of the endpoints changes its status from Online to Degraded. When opening up a browser and trying to navigate to the traffic manager URL, we should no get redirected to the Azure-based deployment (which we see given our App is outputing the content of the environment variable we did set different for each of the deployments, before): 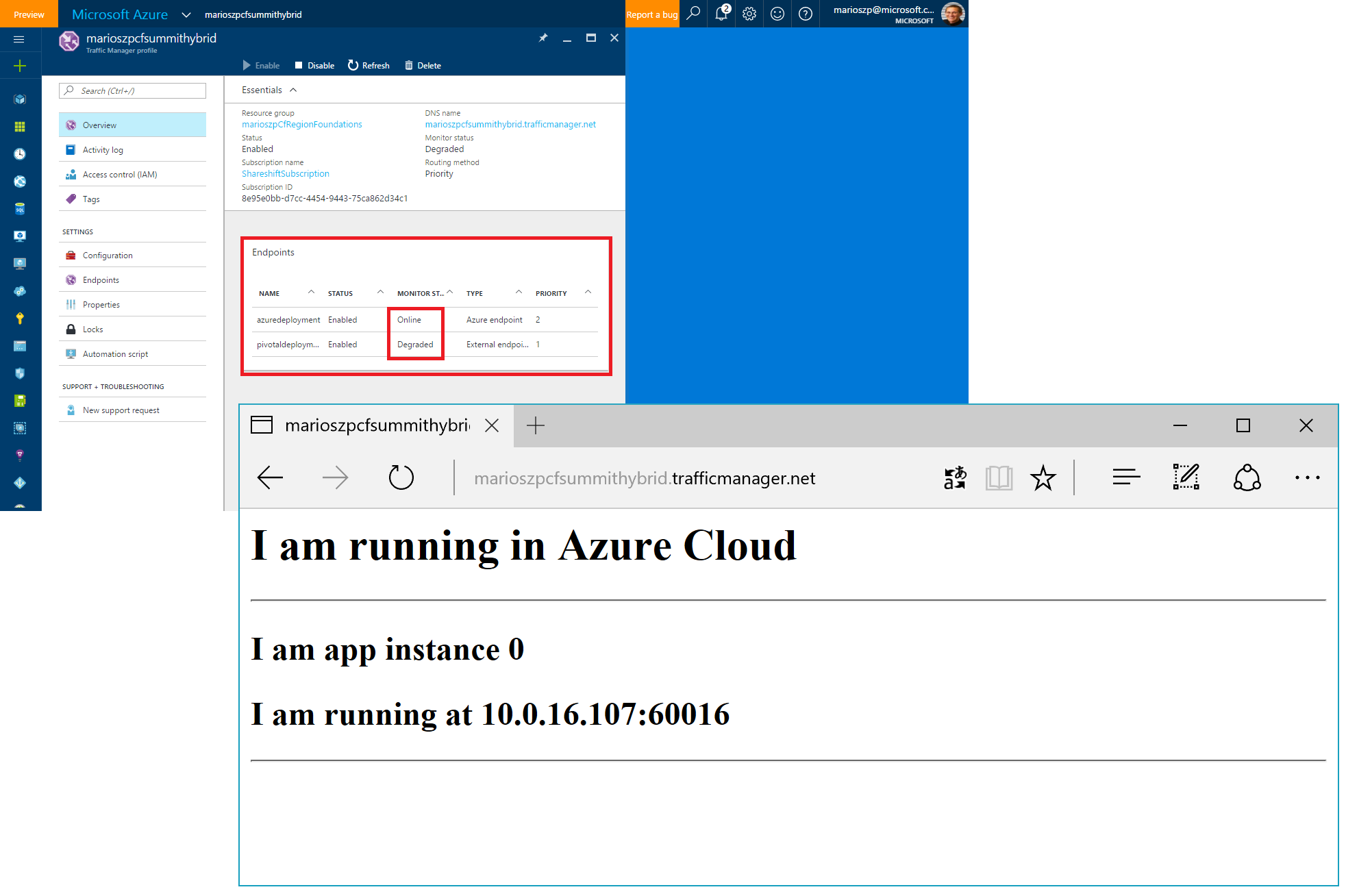 I hope this gives you a nice start in setting up a Multi-Cloud Cloud Foundry environment across Azure and a 3rd-party cloud or your own data center. I will try to continue this conversation on my blog, for sure. There are tons of other cool things to explore with Cloud Foundry in relationship to Azure, and I’ll at least try to cover some of those. Let me know what you think by contacting me through twitter.com/mszcool!